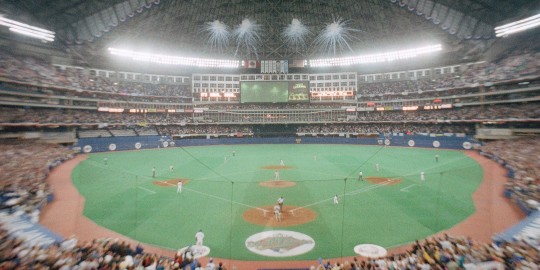 TORONTO – With the CFL Toronto Argos moving to greener pastures in 2016, preparations aimed at making Rogers Center a baseball-only facility have begun at One Blue Jays Way.

While real grass remains on the horizon, the first step in making the parks turfed playing surface more player friendly involves adding a full dirt infield to replace the existing cutouts that have been in place SkyDome opened its doors in 1989.

This February, contractors will be on site excavating the poured concrete that currently lies underneath the Rogers Center’s base paths. In essence, they will be cutting a depth of 12-inches out of the existing surface in order to create a recession deep enough to allow moisture to cycle throughout the base of gravel, sand and surface material that will make up the proposed dirt portion of the stadiums infield.

In its current configuration, the base cutouts stand a mere four inches below the playing surface, a depth that head groundskeeper, Tom Farrell says is insufficient with regards to keeping the surface moist. In turn, a dryer makes for a harder sliding surface around the bags, which can lead to both hesitation and peril.

“Ideally we want to go deeper so that our base is thick enough and deep enough to help better manage the water content” said Farrell at the fourth annual National Coaching Clinic this past weekend.

“If it’s too shallow, it dries out a lot quicker, becomes harder and cracks up during the game. We want to insure that there are enough layers built in to maintain that moisture”.

In the past, hamstring concerns have affected some of the Blue Jays most prominent players including Jose Bautista, Josh Donaldson, Edwin Encarnacion and a laundry list of others who came before them. With a new infield, those within the organization are looking to curb this unfortunate outcome before it costs the club any further ailments.

The idea in doing this is to make the playing surface more comfortable for the players” explained Farrell, who’s been an integral member of the Blue Jays grounds crew since the days of blizzard like conditions at Exhibition Stadium.

In all, the retrofit will take between three to four weeks to complete, and should be ready to go before the Jays take the field in Dunedin this March.

Once sharing a portion of the turf with the Argos, gone are the days of late night conversions and hard spots within the Dome’s carpeted outfield. Although Rogers Centre will host it’s share of non-baseball related events throughout the summer, the stadium’s grounds crew will treat the playing surface similar to the way other ballparks across North America run theirs, leaving the turf and freshly installed infield in place for the duration of the season regardless of the event.

Shifting our sights back to the installation of real grass inside the now 27 year-old venue, the Blue Jays and the University of Guelph remain focused on making this a reality in the coming years. That said, both parties aren’t willing to rush into anything until they can confirm that it will work for the duration of an entire 81 game schedule.

“ We’re still working on that process” said Farrell. “We want to make sure we do it right.”